Undoubtedly prepared on request for specialist applications, i.e. photojournalists wanting to remain as inconspicuous as possible. If you locate a black finish double stroke M3 it may have been factory prepared in this motif. Or it may have been converted from a chrome camera. Leitz Wetzlar and worldwide Leitz service agencies as well as independents could complete such conversions. Check the serial number and the finish (usually a high gloss black lacquer) and seek assistance if you have questions.

Single stroke black M3’s constitute the majority of production. The illustrations show examples that many consider the most distinctive of all M Leicas. 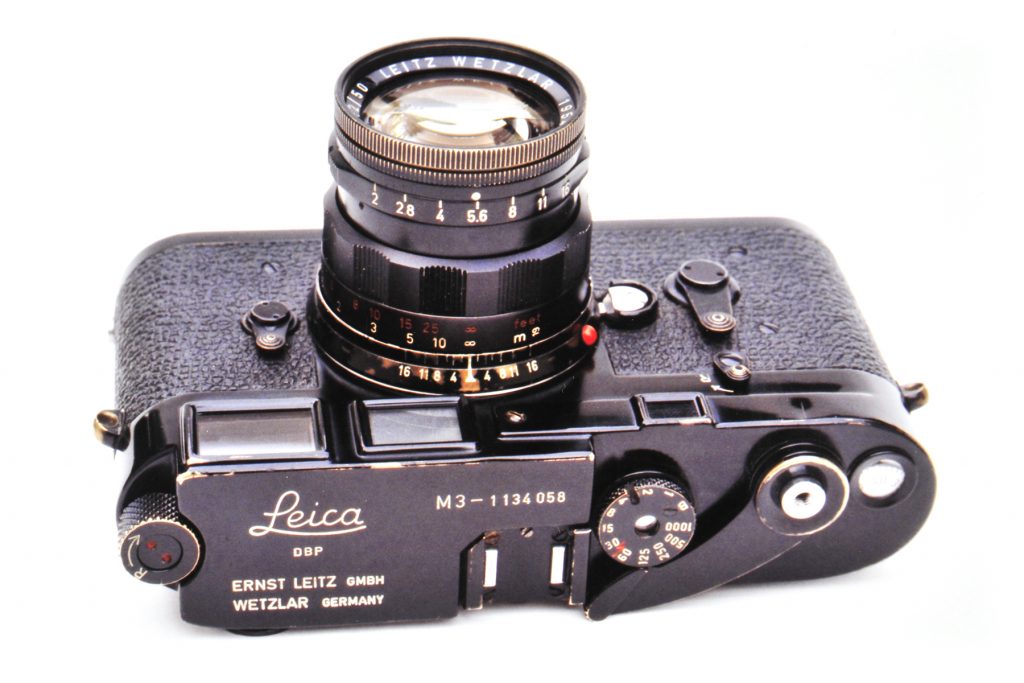 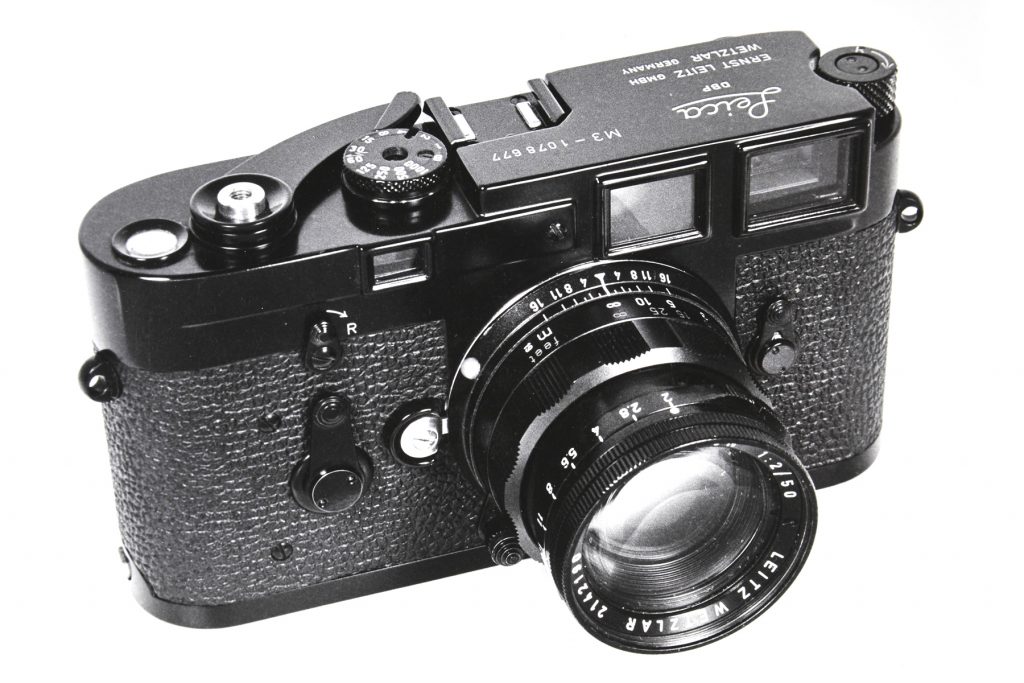 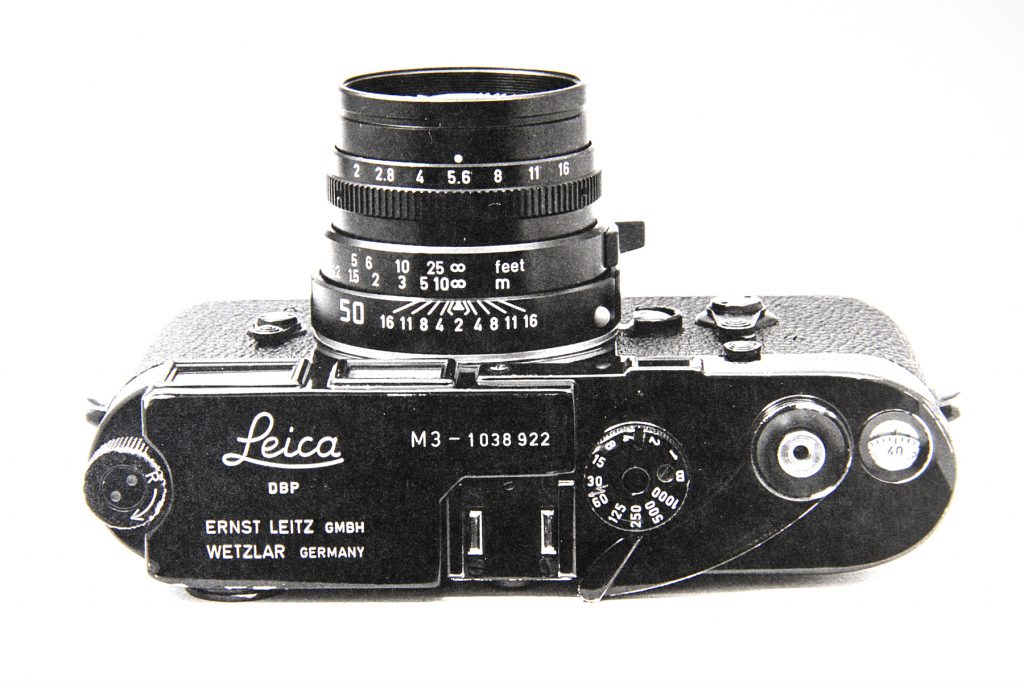 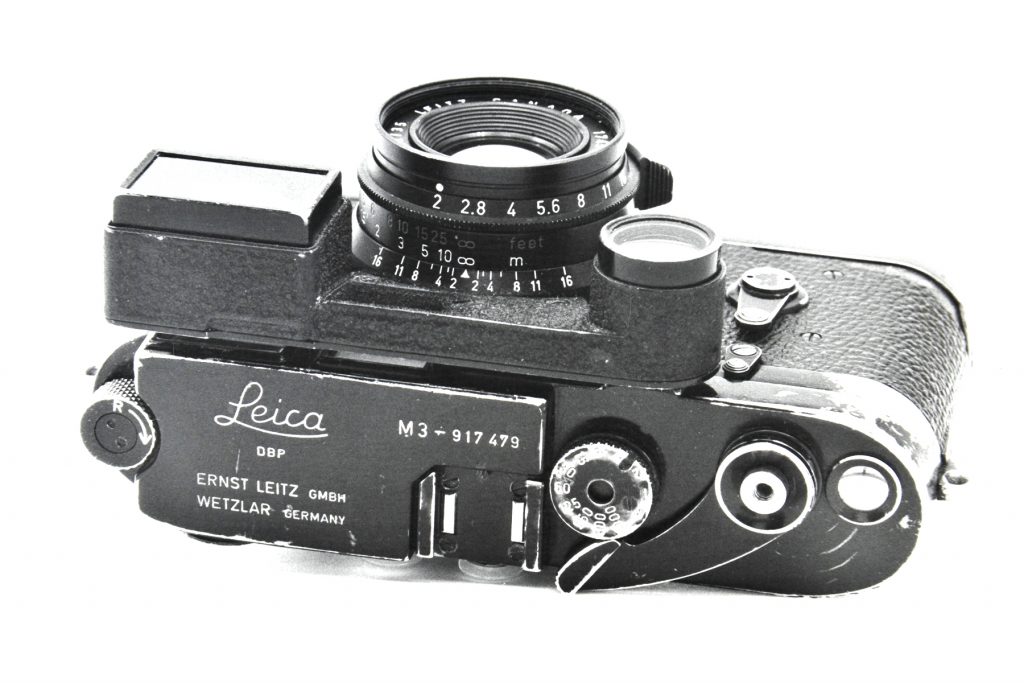 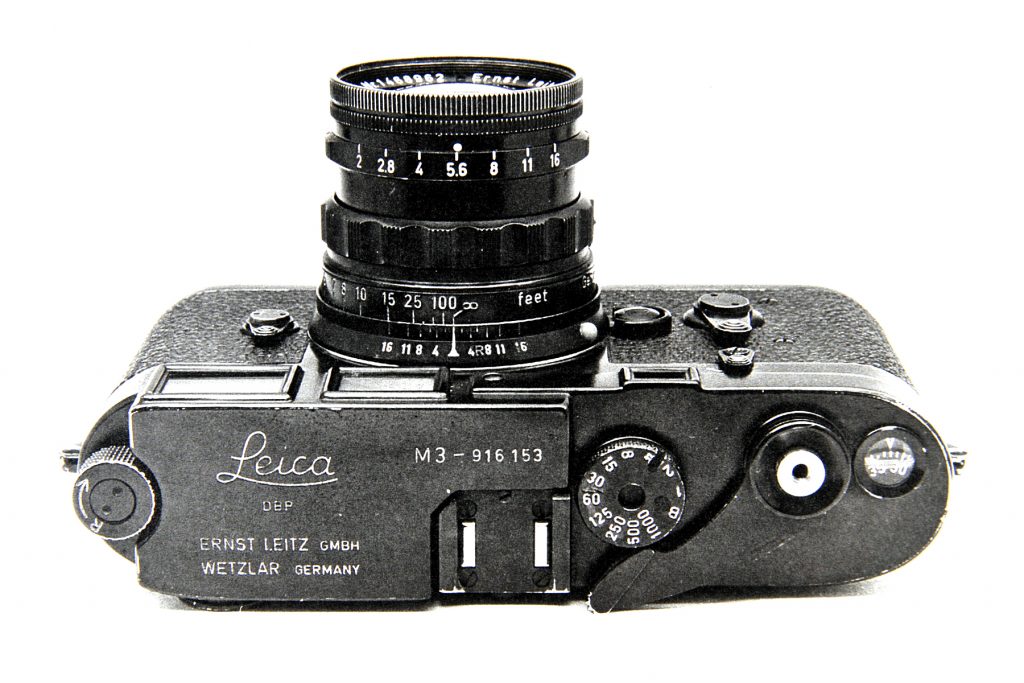 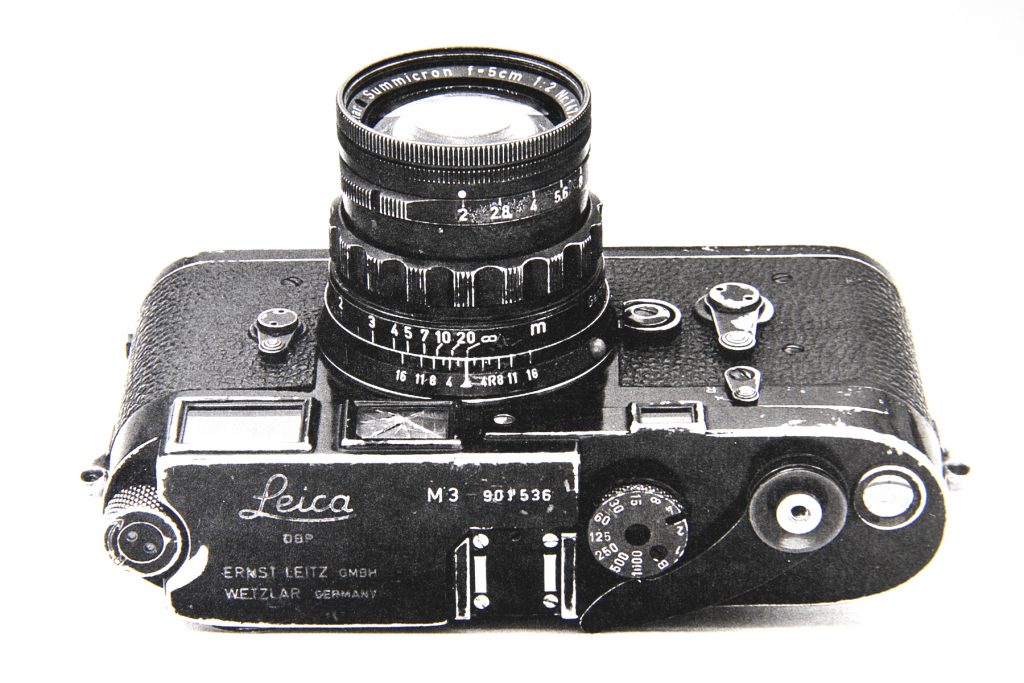 Perhaps the most comprehensive Leica catalog prepared by E.Leitz, Inc. New York was booklet #1275 dated March 1939. Leicas and their accessories from the “golden age” of the 1930’s were presented to entice legions of minicam enthusiasts. The Leica IIIb was the premier model. The Standard (E), II (D), III (F), and 250 (Reporter) provided a range of features and prices.

During the Spring and Summer of 1939 American Leica customers leafed through the pages of #1275 and decided how to begin/expand their Leica System. Patience was required while waiting for delivery of the more exotic items . Most orders were completed but without question some were not.

Events to come in September 1939 surely had a sobering effect on Leica sales. Could equipment still be obtained? Did New York continue to receive merchandise? Delivery ledgers presently secured at Leitz Park suggest the last direct shipments from Wetzlar are dated 3.6.40 (June 3 , 1940). Included are the Leica IIIb and Elmars 35, 50,and 90mm plus a few 50mm Summitars and 135mm Hektors. Five Leica 250’s ( Reporters) equipped with the 73mm Hektor were shipped earlier on 23.10.39.

Supplementary #1275 price sheets effective October 1 , 1940 list the then nearly unknown VIOOH image erecting universal viewfinder as #66006 at 48 dollars. As far as I can ascertain the VIOOH was never directly shipped toNew York. It appears New York sold only from stock after June 1940. Of course later shipments could have come through neutral channels. I suspect evaluation sample VIOOH’s reached New York in this way and these samples became the basis for the New York manufactured IMFIN of 1944. The United States and Germany were officially at war from December 11, 1941. E.Leitz, Inc. New York was promptly seized by the Alien Property Custodian. During 1941-1945 New York managed to survive by offering equipment fabricated domestically. The IMFIN, VIOAD, VUDAK, and four Wollensak lenses come to mind. 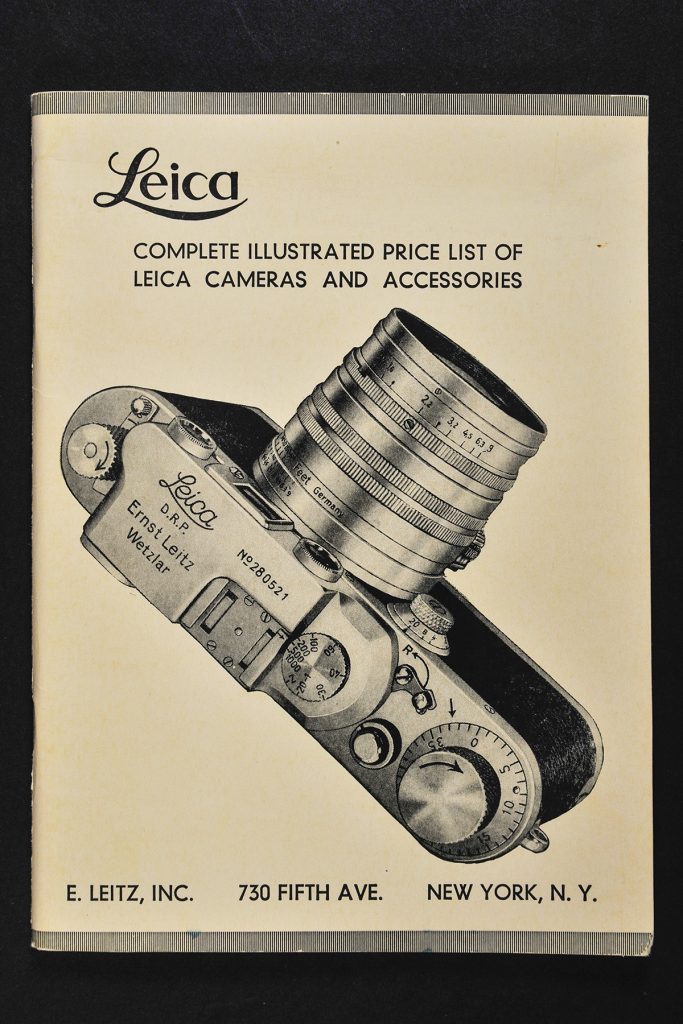 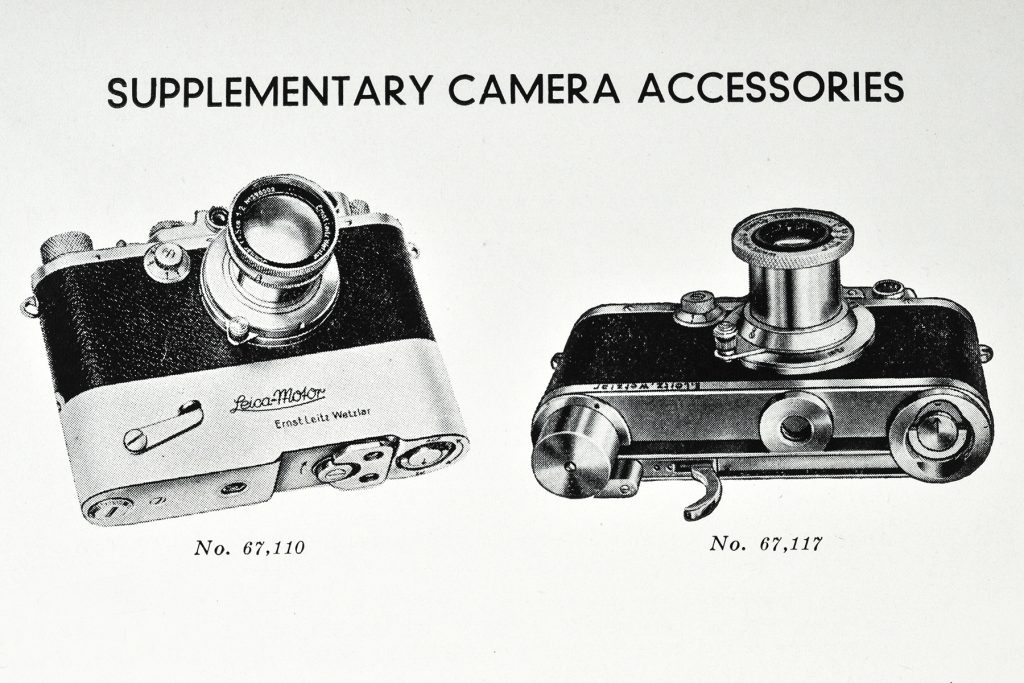 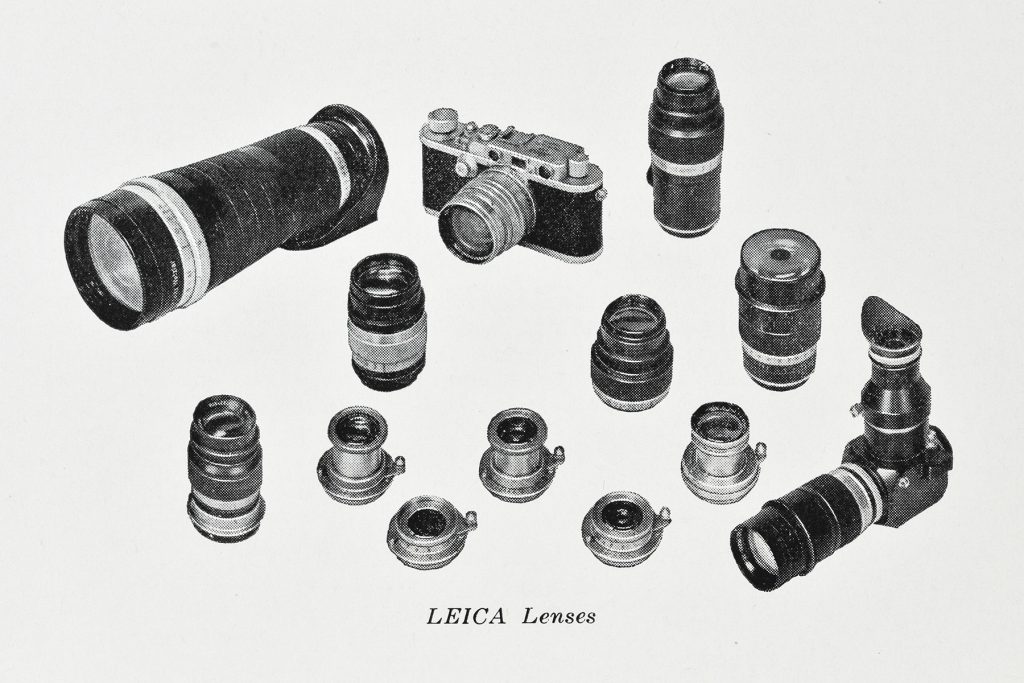 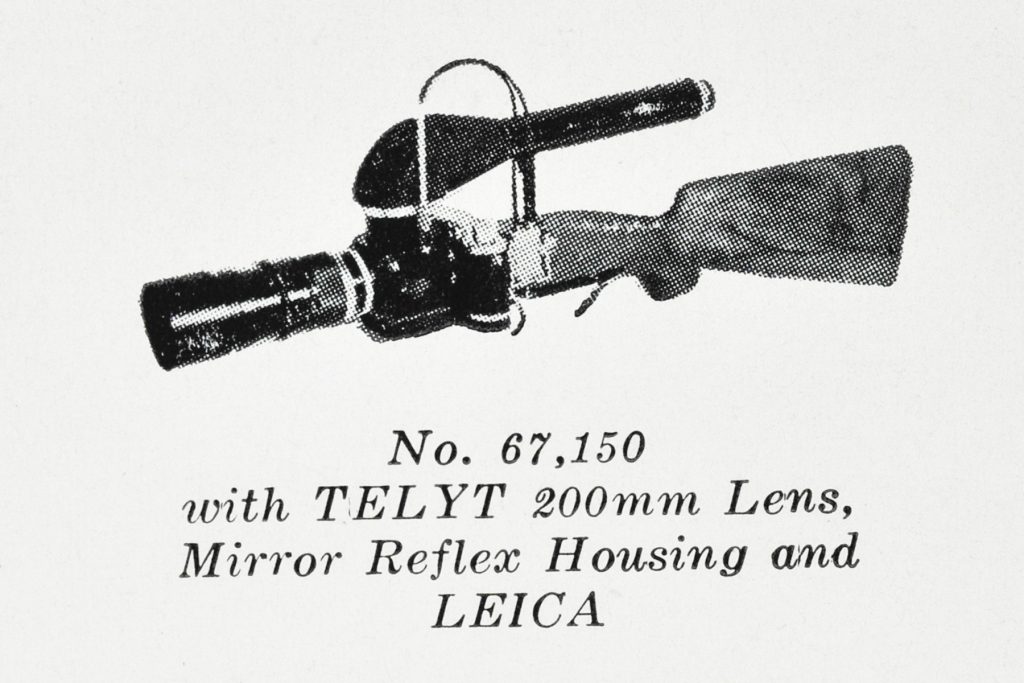 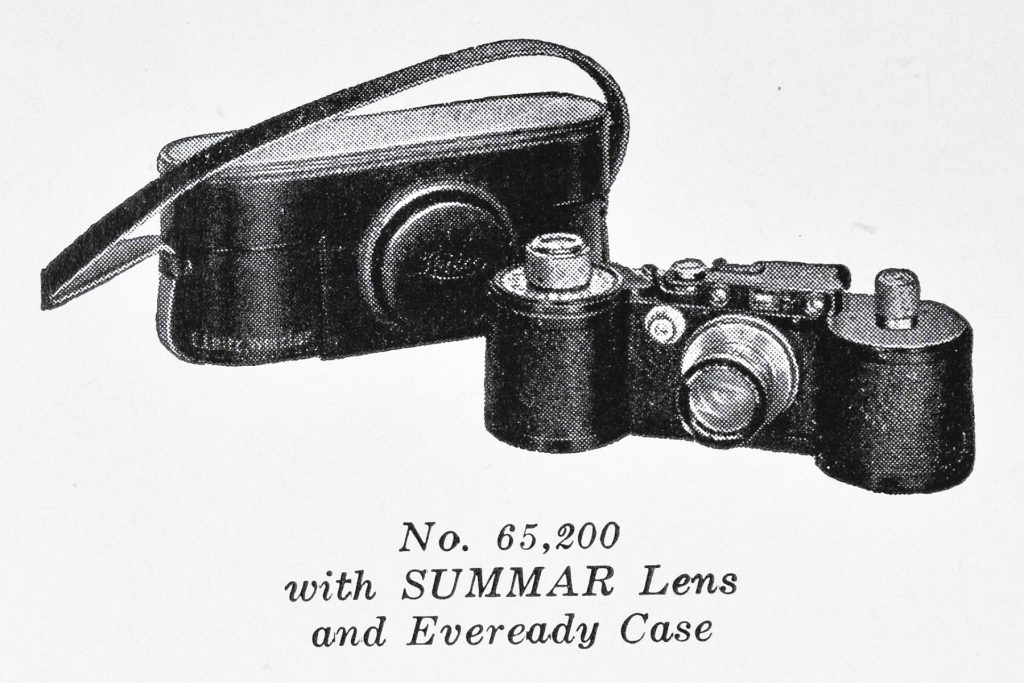 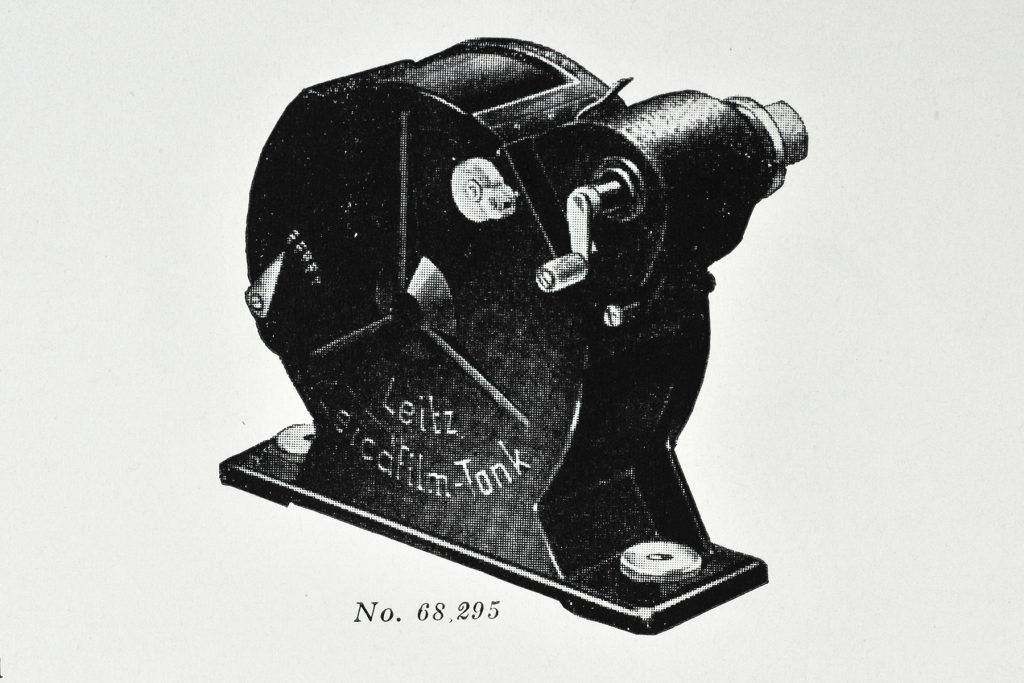 When you are finally ready to part with your old camera (film or digital) gear for the latest model, or maybe you wish to switch systems or you just wish to get cash for your old camera,lenses and accessories that have been sitting in your closet or camera bag, 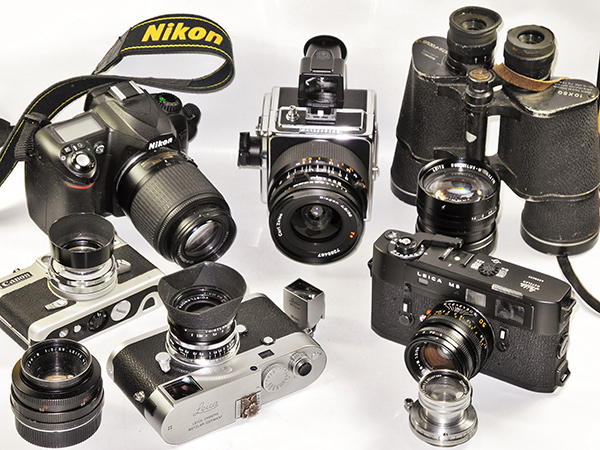 You should contact a company like ours that has been buying and selling used and new camera gear for the past 30 years with 100% positive feedback from consumers.

We buy small and large collections.

Detailing the exact condition of your used camera gear is essential.

Details like camera model name, cosmetic condition, any type of wear and slight damage to any of your gear,,camera shutter count etc, For lenses inspect for scratches or dust with both the front end glass,cleaning marks,haze,fungus. The best way to inspect lens glass condition is to shine light from both the back and front while inspecting viewing;it will give you a good idea as to real glass condition.

Trading in or selling your gear to a reputable company like ours,Classic Connection fine camera and to the owner Sam Shoshan will definitely ease up any fear and apprehension that you may have with the selling process. 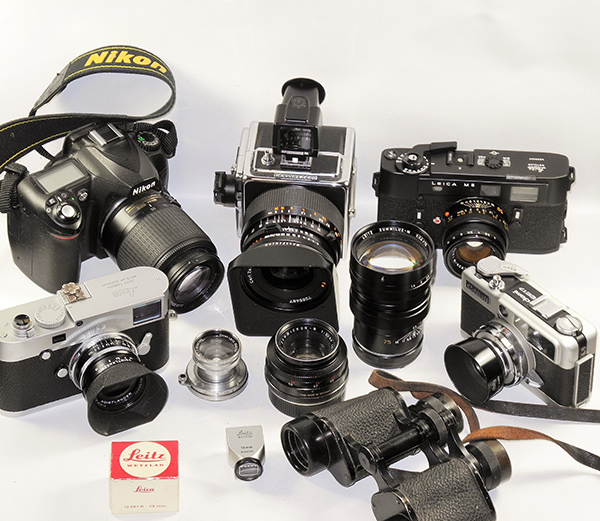 Selling your gear on your own will for sure bypass the middleman and potentially can get you more money for your gear. You will be able to control the process and deal directly with the buyer, set up the selling prices etc’ the downsides are finding your buyer, getting paid, advertising, creating the listing & taking pictures of your gear, and avoiding scams etc.

The places to sell used gear like yours can be eBay, Craigslist or Facebook and used marketplace websites. Potential buyers are likely to buy from camera dealers because of the reputation, return privilege,peace of mind and warranty.

What you should know before you sell us your used camera gear,lenses & accessories :

When sending us your gear you should send it (Signature Required) to:

We will provide you with our Fedex account or create a label for you.

The Leitz mirror reflex housing (Visoflex 1) circa 1950-1958 was typically equipped with the PEGOO 45 degree magnifier. The 45 degree viewing angle made close-up photography more convenient than when the straight up and down LVFOO magnifier was attached. Nature photographers especially valued the tripod mounted Visoflex1/Bellows1/135mm Hektor assemblage for their precise and demanding work.

The latest digital M’s can be fitted to this vintage equipment now nearly 70 years old. The Leica body can be positioned for compositions with the Visoflex1/ PEGOO remaining in a fixed position. The modern incarnation of the PEGOO is represented by the electronic Visoflexes 18767 and 18753. The electronic Visoflex permits a PEGOO like 45 degree viewing angle for horizontals. Owners of the digital Sl and SL2 can utilize vintage Leica lenses with adapters. There is no provision for 45 degree viewing.

Some enthusiasts who want to use their old lenses with 45 degree viewing have chosen digital cameras not manufactured by Leica. The lightweight Nikon Z6 has become a favorite. The Fuji GH1 ( and later models) provides full articulation of the viewing screen for 45 degree viewing for both horizontals and verticals.

The illustrations show the PEGOO circa early 1950’s. The 45 degree viewing angle can be acheived with the electronicVisoflex on the digital M, the Nikon Z6, and the Fuji GH1. 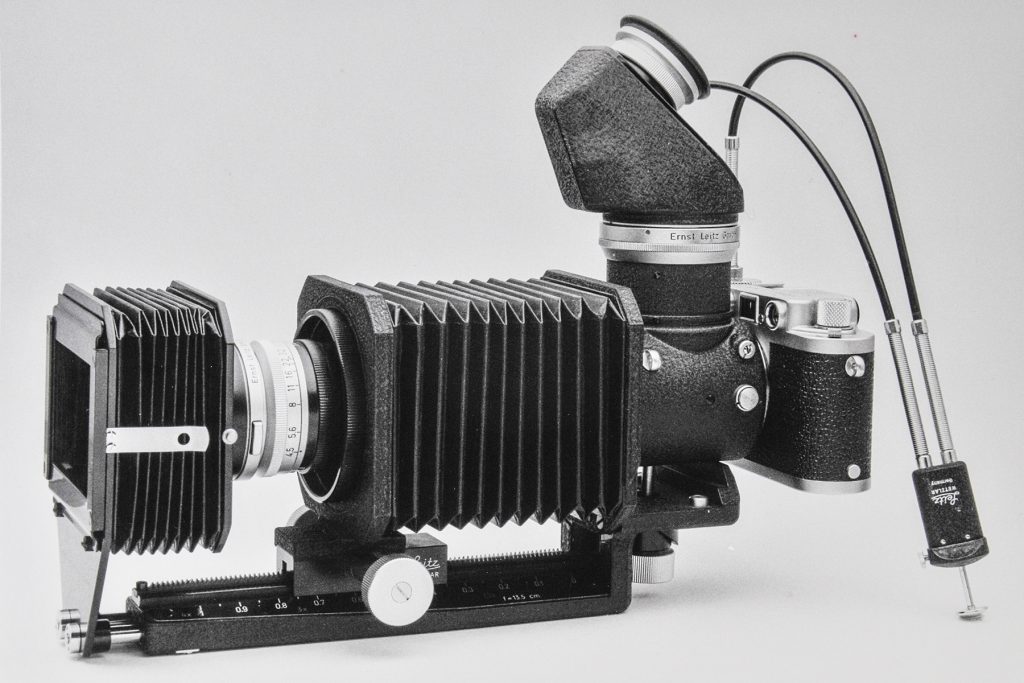 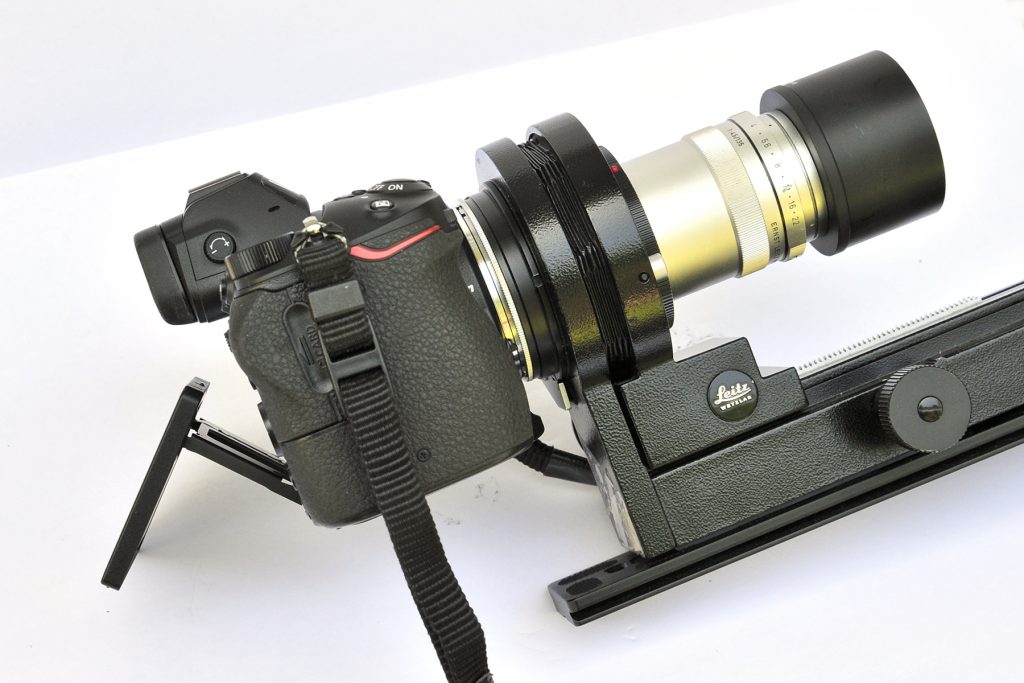 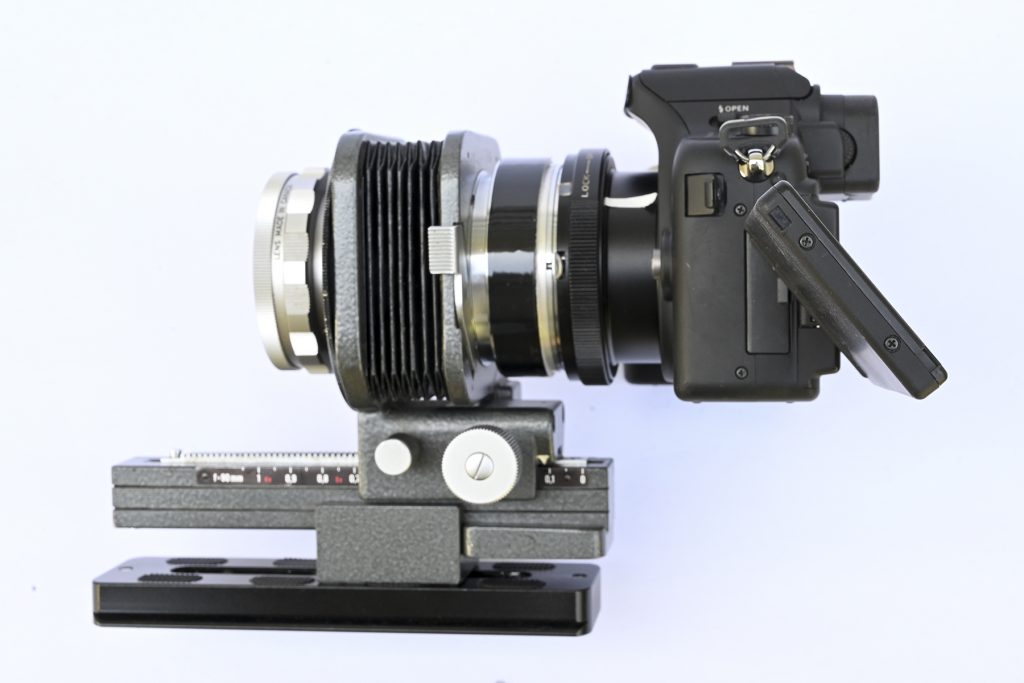 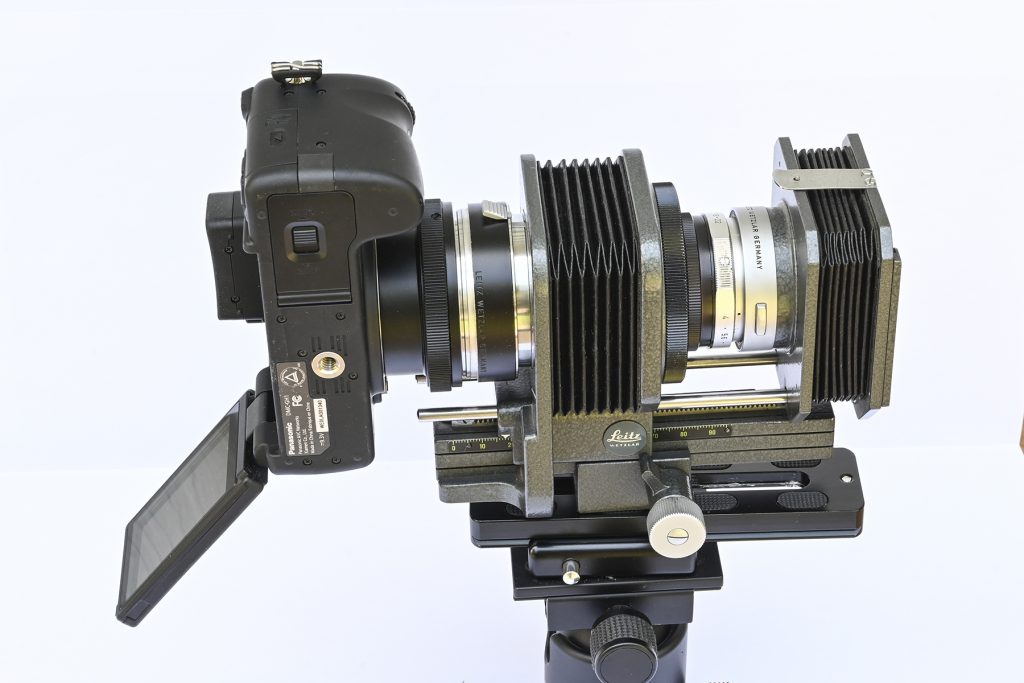 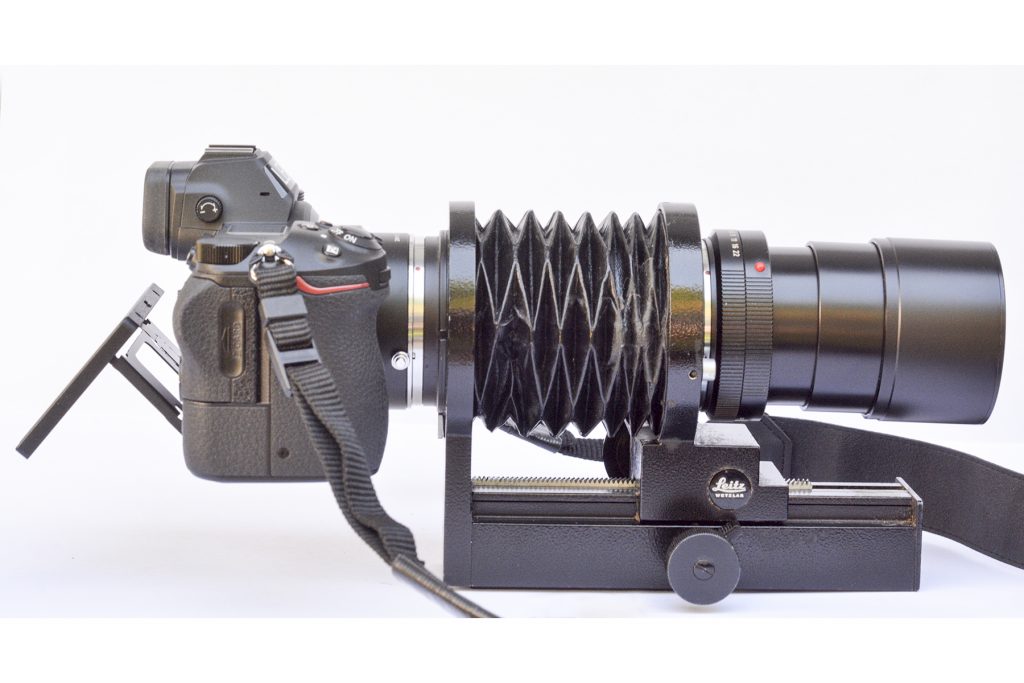 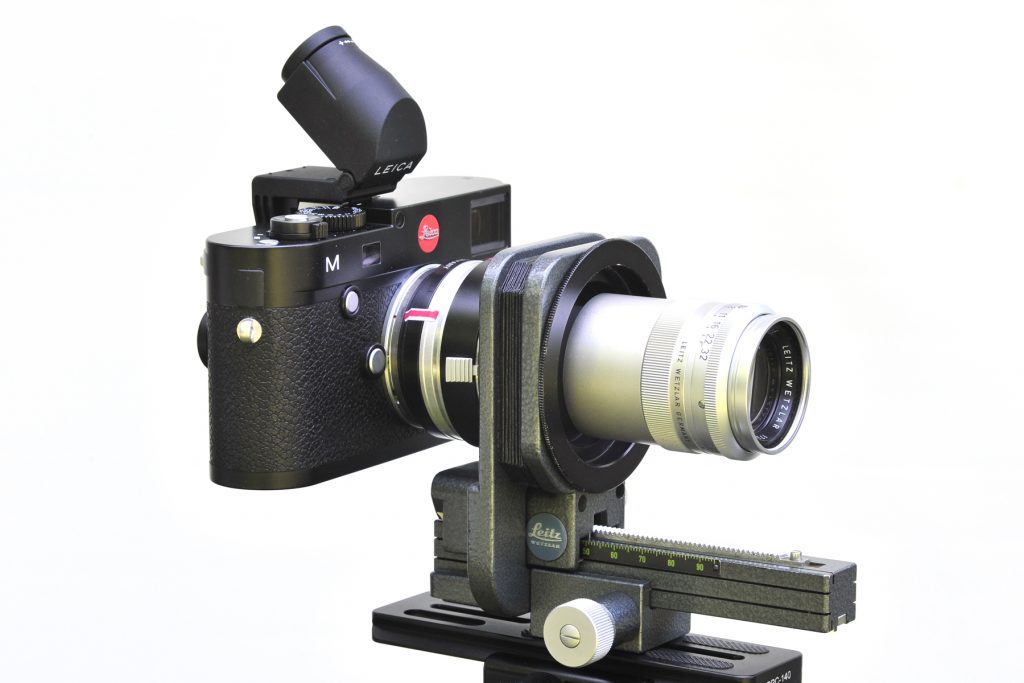 One thousand Leica IIIc cameras dispatched to at least 18 countries including neutrals Portugal, Spain, Sweden, and Switzerland. All during 1942 with no direct deliveries to the Allies.

After nearly five decades of research this 1000 camera batch continues to prove elusive.

Where are these Leicas?

Were most of them consumed during World War II? 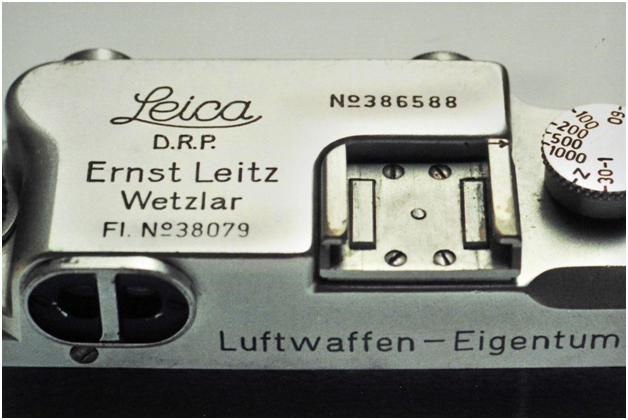 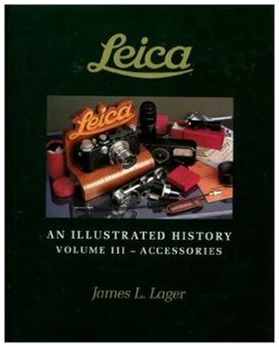