In the early 1930’s Ernst Leitz Wetzlar experimented with a Leica camera capable of making more than the usual 36 exposures. Experimentation resulted in the Leica Reporter ( also called the Leica 250). A maximum
of thirty three feet of film for 250 exposures filled the KBOOF feed cassette. Exposed film was transported into a second KBOOF. Approximately
one thousand Reporters were manufactured and utilized for industrial, business, scientific, research, medical, and military applications.
Earliest deliveries date as 1934 with a very few completed as late as 1953.
In July 1936 the top shutter speed was changed from 1/500 to 1/1000 second. Early cameras to 1/500 are officially known as the FF. Cameras to 1/1000 have been labeled GG although Leitz documents do not acknowledge this. Many Reporters were heavily used and subsequently returned to Leitz for rebuilding. During the 1950’s f series flash synchronization could be added.
The photographs illustrate Leica 250’s encountered during decades of research. Surviving cameras are highly prized by collectors. Capable of 250 exposures without reloading the Reporter is unique in Leica History. 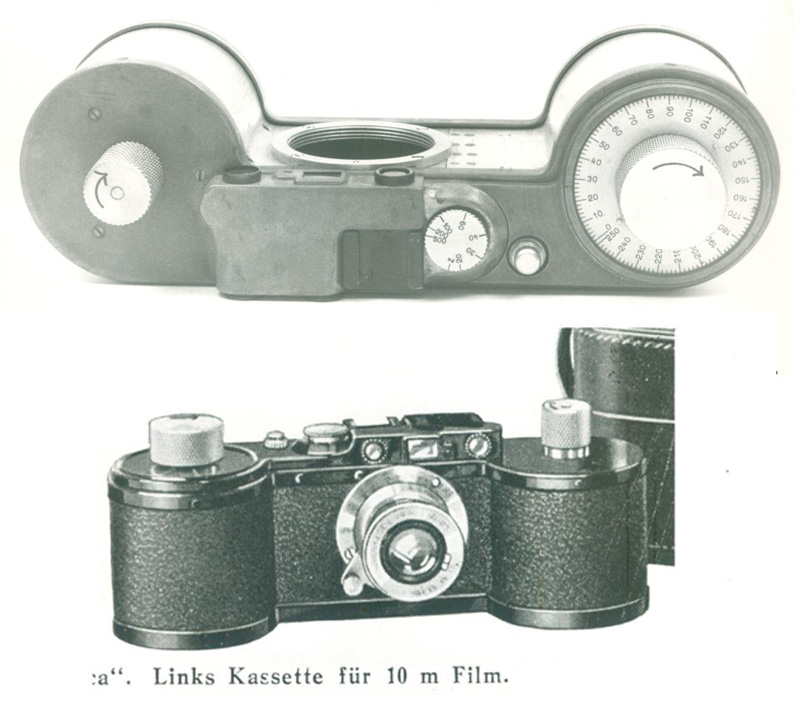 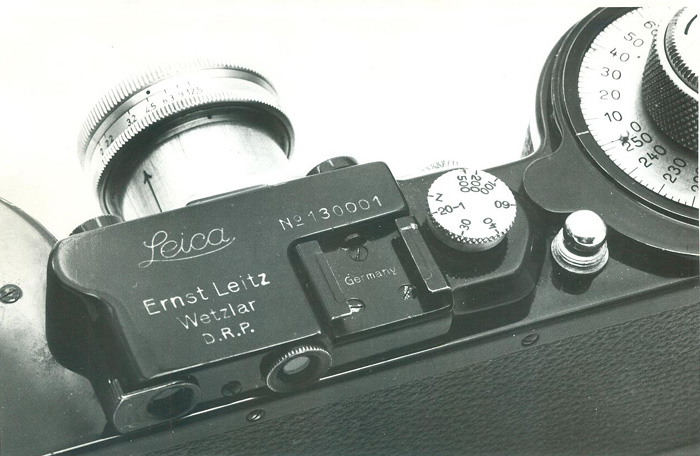 Every photographer, whether amateur, profes¬sional or scientific, experiences at times the need of greater film capacity than the regular Leica is capable of offering. There is, for instance, the press photographer who may lose irretrievable opportunities if he is compelled to insert a new film chamber while interesting events are in progress, there is the amateur on his holiday tour, or the explorer further afield, both of whom have only rare opportunities of getting their exposures, or there is the scientific photographer who has to reproduce an old volume page by page, for which purpose it would be an unwelcome waste of time to have to put in a new film after every 36 pages, apart from the inconvenience of having to carry about a whole series of film chambers for the work. 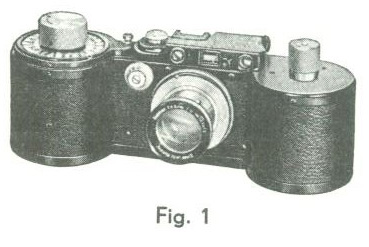 Thus it comes about that for some long time past the desire has been expressed by various users of our camera for a Leica with a film chamber sufficient for a far larger number of exposures. To meet this demand we have brought out under the name “Leica FF” a Leica camera the film chamber of which is loaded with a film of 30 ft. length, thus permit¬ting more than 250 exposures to be made with a single loading.
The “Leica FF” is supplied with two film chambers, one serving as take-up chamber. This is necessary on account of the 30 ft. length of film, which would be exceedingly tedi¬ous to re-wind.
The “Leica FF” is usually equipped with the 50 mm. (2-inch) f 3.5 Standard Elmar lens but can be supplied to order with any other lens. If another lens is desired for the “Leica FE” the price is increased accordingly by the price of the lens required. In ordering a “Leica FF” with another lens the code- word for the latter is to be added to the codeword “Loomy”.

For particulars of the Leica, the interchangeable Leica lenses, and the numerous Leica accessories, see our special descriptive booklets. 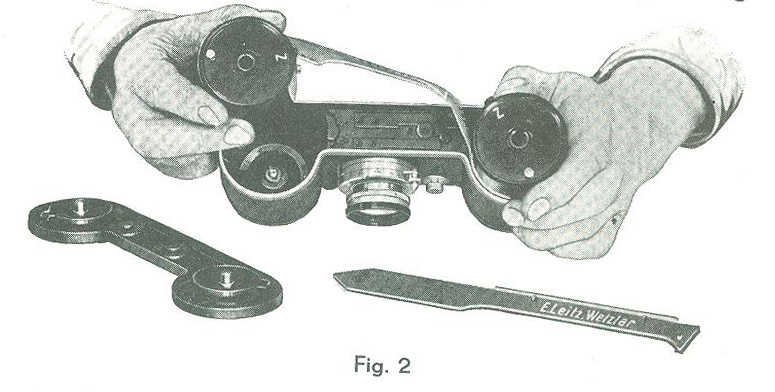 the chamber have especially high heads (fig. 2). This fact assures the insertion of the film chambers in the correct position. The base cover-plate of the “Leica FF”, which is doubly locked, cannot be closed unless the two film cham¬bers are properly placed. When the two locks are closed the two chambers open together. The film is not wound back after exposure. A portion of film which has been exposed can be removed from the camera, after being cut off within the camera by means of a cutting device. 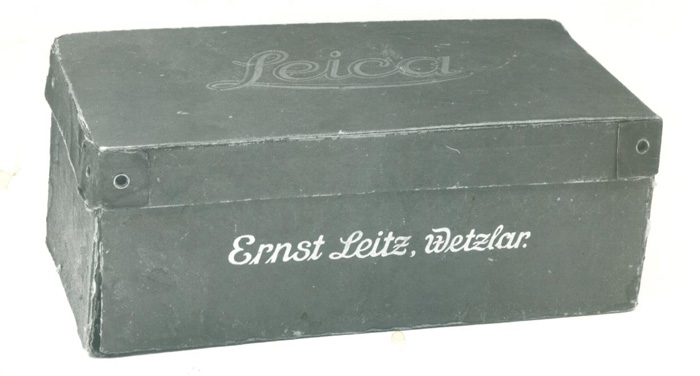 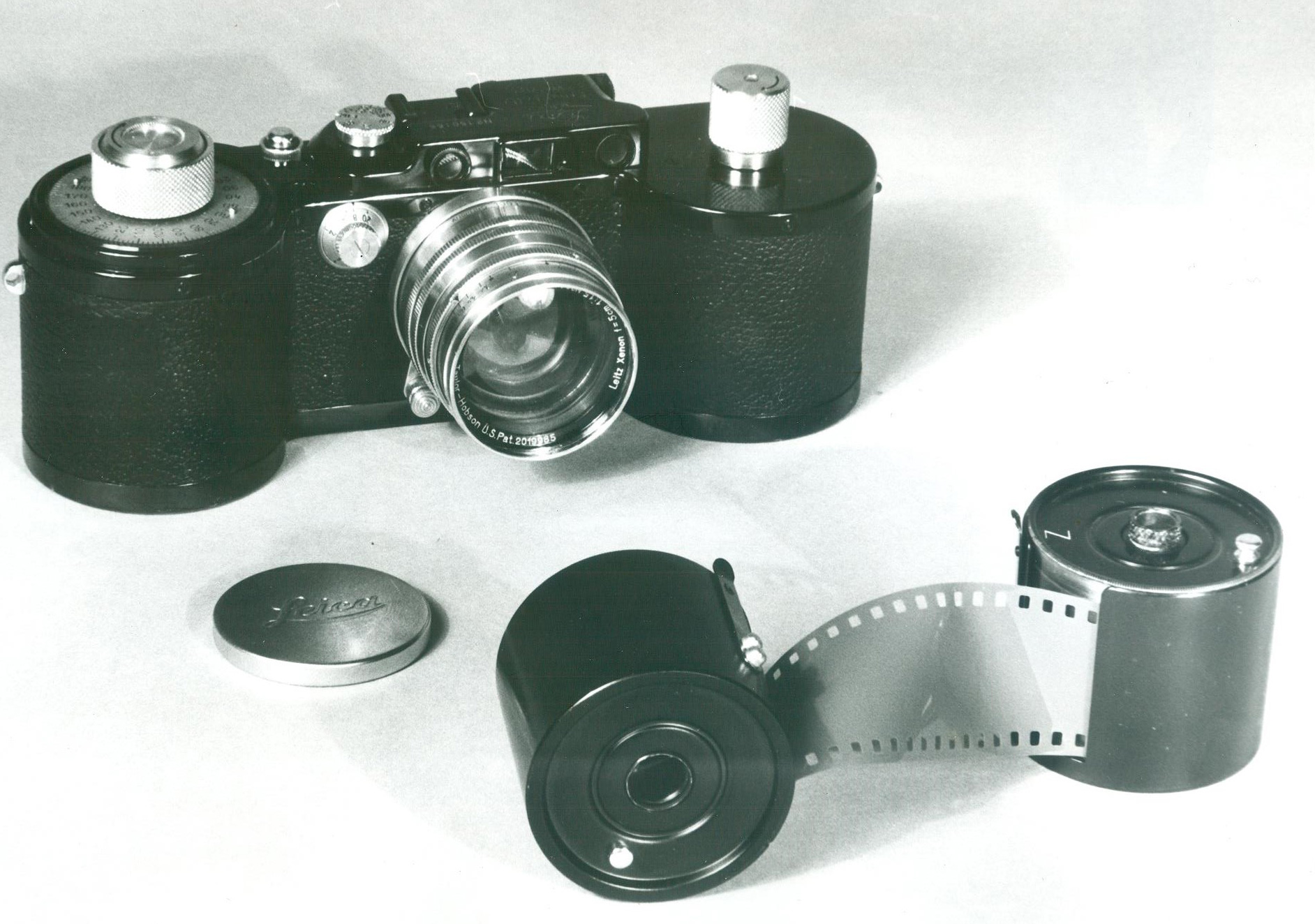 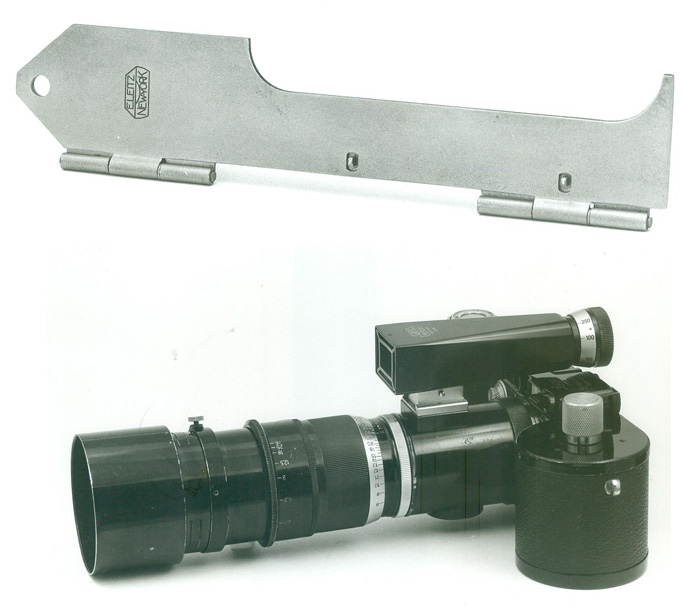 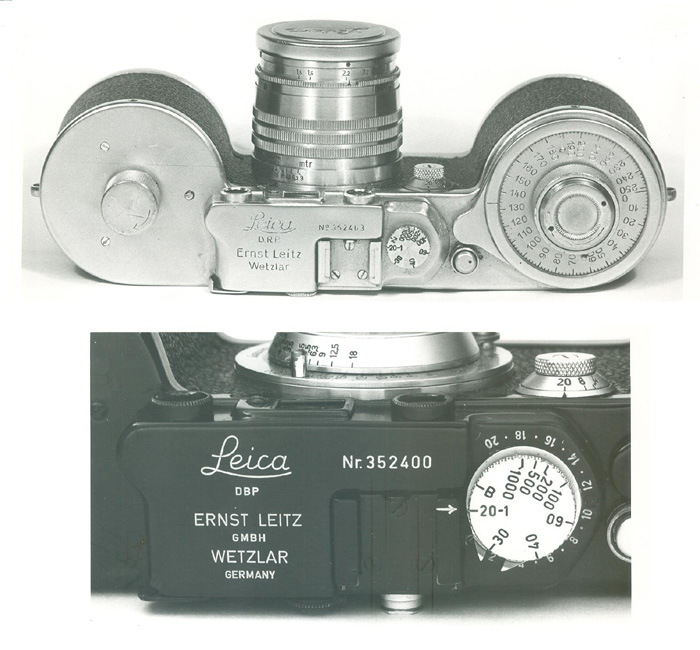 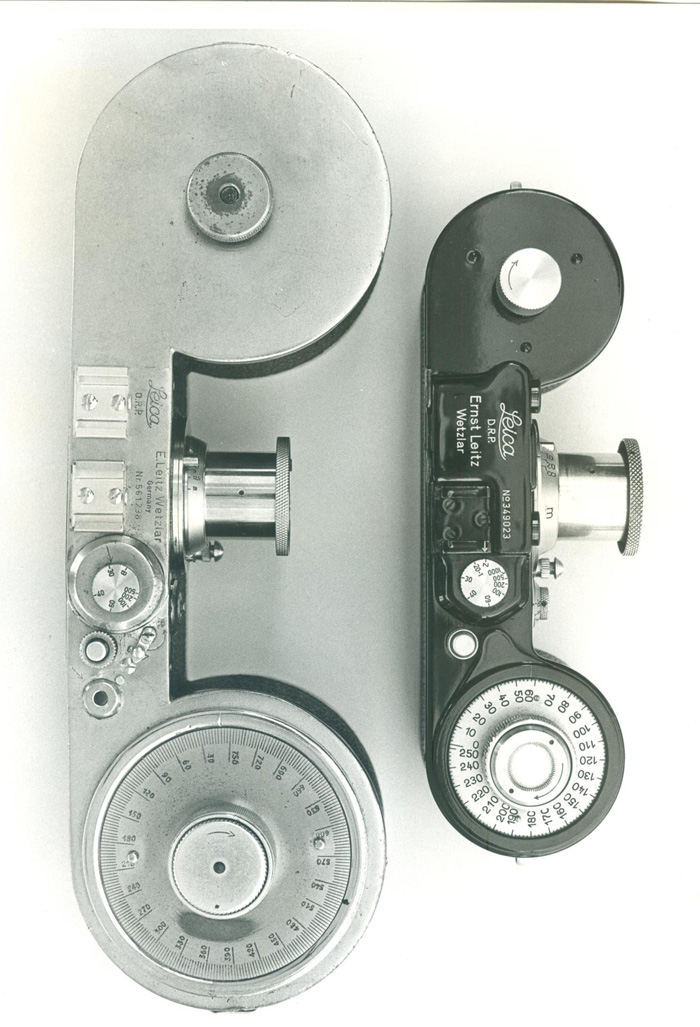 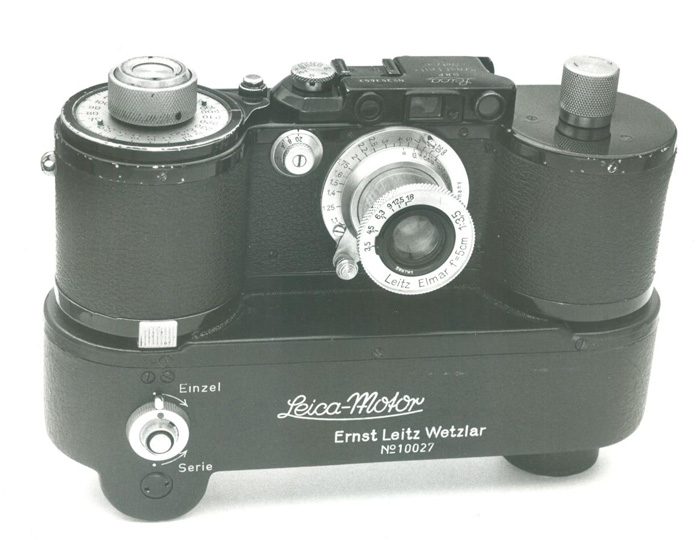 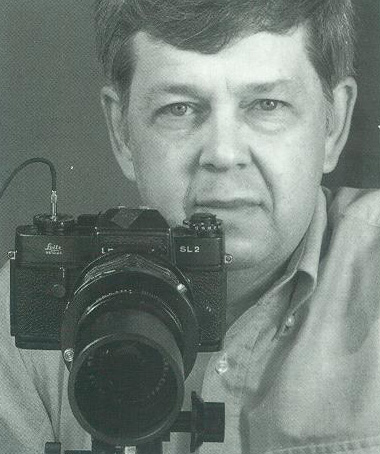 James L. Lager received his B.S. and M.S. degrees from Ohio State University. In 1971 he joined the Leica Technical Center of E. Leitz, Inc. Rockleigh, N.J. Since 1975 Jim has worked in the retail sector of the photo industry. The author’s previous books are; LEICA ILLUSTRATED GUIDE, (1975). LEICA ILLUSTRATED GUIDE II, (1978). LEICA ILLUS-TRATED GUIDE III, (1979), LEICA LITERATURE, (1980) and LEICA, AN ILLUSTRATED HIS¬TORY, VOLUME I – CAMERAS, (1993) and VOLUME II – LENSES, (1994). Jim is a past president of the Leica Historical Society of America (LHSA) and past editor of its official publication, VIEWFINDER, in which he wrote and illustrated over 100 articles. His photographs have been published in LEICA FOTOGRAFIE and LEICA PHOTOGRAPHY. Over 22 years of almost daily contact with the Leica camera on both pragmatic and esthetic levels, has given Jim Lager a unique perspective on this engaging subject.

Virtually all of the author’s photographs in this book were taken with a Leicaflex SL or SL2, with Bellows R/100 f4.0 Macro Elmar R combination. The 60mm f2.8 Macro Elmarit R or 65mm f3.5 Elmar were used for larger subjects. Panatomic X or Agfapan 25 film was generally used, and a light tent was employed for soft, even illumination.
John Mecray’s supplimentary photos were taken with a Leica R6 and a 100mm 1:2.8 Apo-Macro¬Elmarit-R.