Better News is that I have one!  (Thanks to my long time “Leica pusher” and good friend Sam, here at the Classic Connection).

Caveat: I just got this, so have not employed it on a paying assignment yet, nor will I do so until I’ve played with it for some time to be sure of it. Therefore you will have to excuse the mundane “snapshots” used to illustrate the adapter in action (except the “fitness” shots used to illustrate high speed flash sync). .

Introduction to the Leica H to S mount adapter:

For those not familiar with the H to S unit recently announced by Leica, be aware that this is no typical “dumb” adapter, nor a rinky-dink third party cobbled together piece of MacGivver gear requiring you to disassemble an expensive lens. It is an extremely well made, fully functional electronic data-bus adapter that allows full use of Hasselblad H mount Leaf Shutter lenses with AF, and convenient open aperture shooting/metering … thus offering a very comprehensive line up of Hasselblad medium format focal lengths from 28mm to 300mm. This includes some focal lengths either not yet available in the S line, or ones not currently planned. 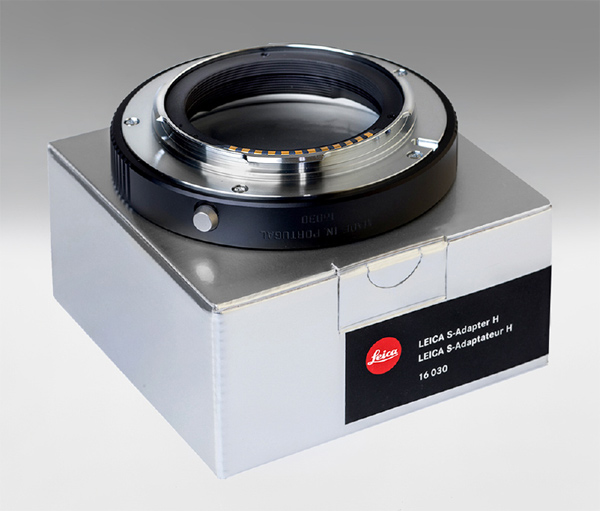 When mounted to the S2, each of the H mount lenses can be used in FP mode (Focal Plane shutter down to 1/4000 shutter speed) … or CS mode (Central Shutter, a leaf shutter located in the lens, which allows flash sync down to 1/750 Shutter speed)  Here are a few H lenses available for use on the S2: 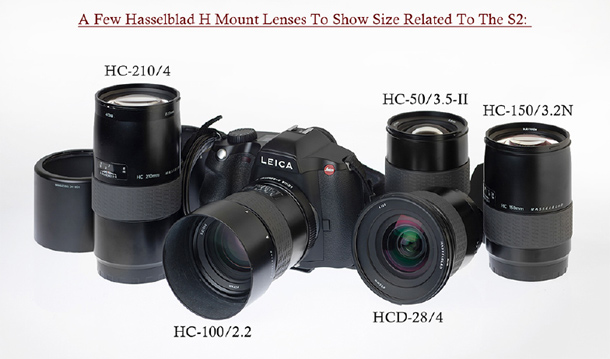 Now the first question that comes to mind is why would Leica do this? They are a premiere maker of optics, and the S line-up is all ground up designs specifically made for demanding digital photography.

Well, as a working professional I can provide some over-all answers, and a few specific ones.

Generally speaking: the current S line-up, while fairly well spread out, consists of 5 basic focal lengths … however, IMO, few working photographers will spring for both the S-30 and S-35 at the price of these lenses because, while different, they are pretty close to each other. So, in effect most S2 users have 4 focal lengths to work with, which can be somewhat constricting depending on the diversity of work being done, the lens draw effect you want, and the space you may be shooting in.

Another general aspect is that all of the H lenses are Leaf Shutter optics. Important for some because high sync speeds with studio strobes is a big deal for many advanced enthusiasts using so called “strobists” techniques of off-camera lighting, and working professionals using extensive strobe systems in studio and on location. Leica has been slow to get their Leaf Shutter CS lenses to market, and even then it is still a somewhat restricted line-up of focal lengths.

High sync speeds using full power studio type strobes, or portable battery strobes, should not be confused with High Speed Sync mode (HSS) on the SF58 speed-light. SF58 HSS is accomplished by pulsing the light, which further weakens the amount of light reaching the subject, from a source that is already demure even at full power compared to the average strobe light. High speed sync with strobe lights allows the photographer to control the effect of the ambient … and even use wider apertures, or overpower the sun, or totally kill the effect of stray ambient by using down to 1/750 shutter verses the 1/125 of the S2 in focal plane shutter mode.

For example, here is a studio “fitness” shot of a figure competitor using high shutter speed sync to kill the ambient light in my studio, which is white and brightly lit by windows and a skylight … and another of the same woman outdoors using a higher sync speed to control the ambient level on a recent bright summer morning. Profoto lighting was employed in both cases. 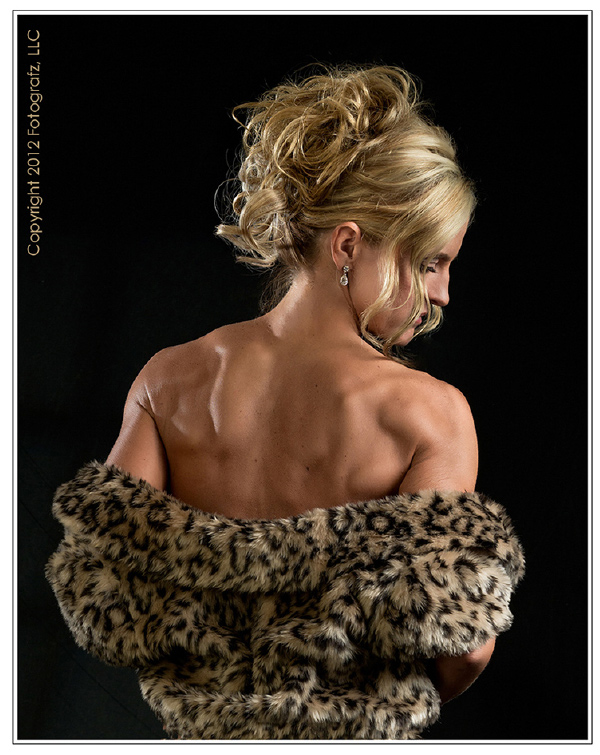 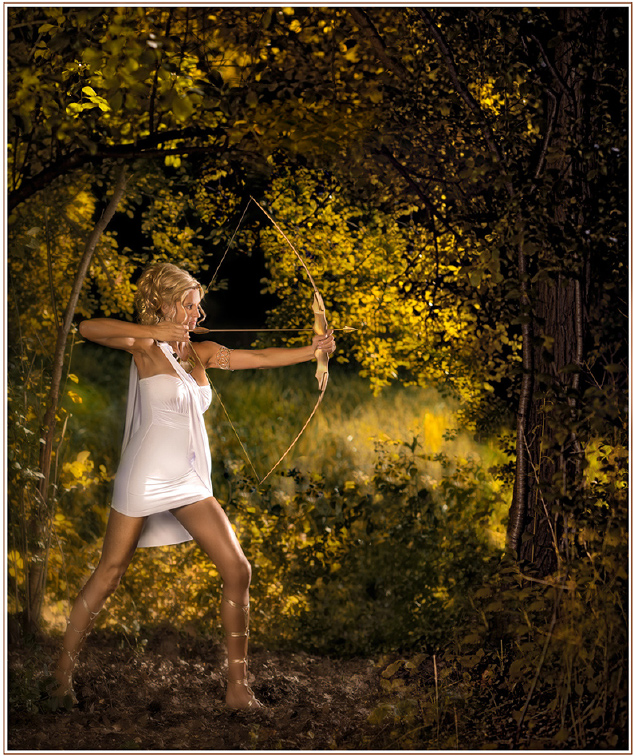 Lastly, the H system is pretty wide spread and has been available for quite some time. However, the user of the H system is completely relegated to Leaf Shutter work, and the H cameras currently do NOT offer a focal plane option. This has restricted the H user to a top shutter speed of 1/800, and we have to employ ND filters to use faster apertures such as f/2.2 in bright ambient light. The S2 is a dual shutter camera and can do both. So, the HC and HCD lenses can be used at higher shutter speeds down to 1/4000 for the first time ever, making the S2 an attractive option for owners of a Hasselblad system.

Specifically speaking, some of the H lenses perform functions their S counterpart does not.

The HC 120/4 Macro focuses down to a 1:1 ratio, where the wonderful S-120 does 1:2. Literally, this means if you shoot a close-up, the object shot with the H macro can be captured twice as big as the same object captured by the S macro. I currently have the first version of the HD 120/4, but will be upgrading to the tweaked MK-II version soon, so it should be even better on the S2. However, that is driven more by the demands of the H4D/60 than the S2. I do not think there is enough of a difference for the S2 user, and the first version of the HC 120 Macro is fine on the S2 for those wishing to get closer. 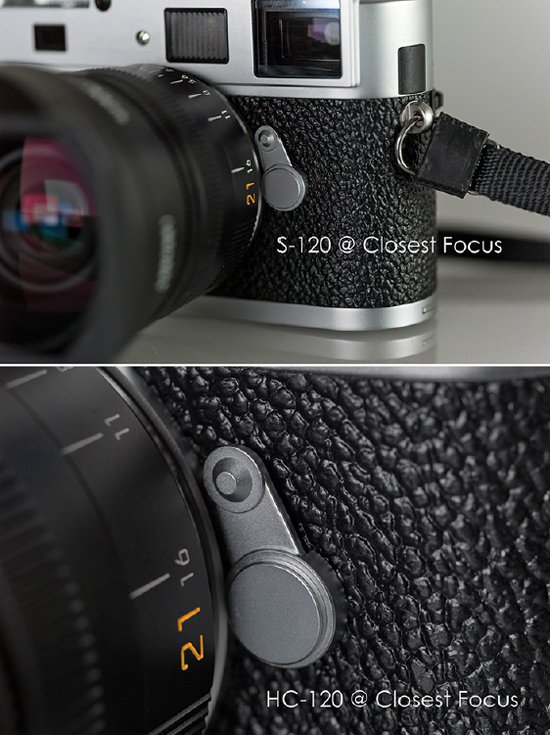 The HCD 28 lens may be the widest lens with a Leaf Shutter that we can use on the S camera. I do not have the S-30mm to compare actual coverage, but the HCD28 is considerably wider than the S-35mm that I do have. Leica has stated that the planned S-24mm will not be available with a Central Shutter. Attached here are a few quick snaps showing the difference in coverage from the samevantage point using the HCD28 and S-35. If I ever get a chance to use a S-30mm I will compare coverage, but I suspect the HCD28 will still be a tiny bit wider. 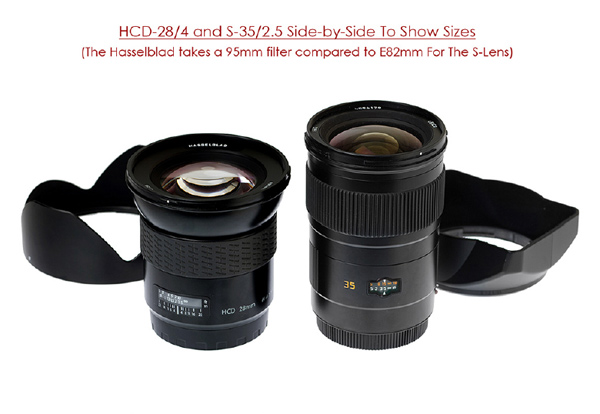 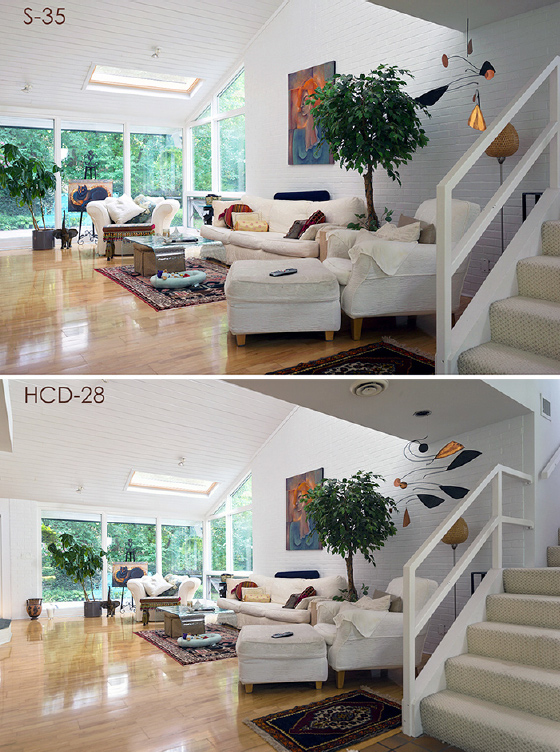 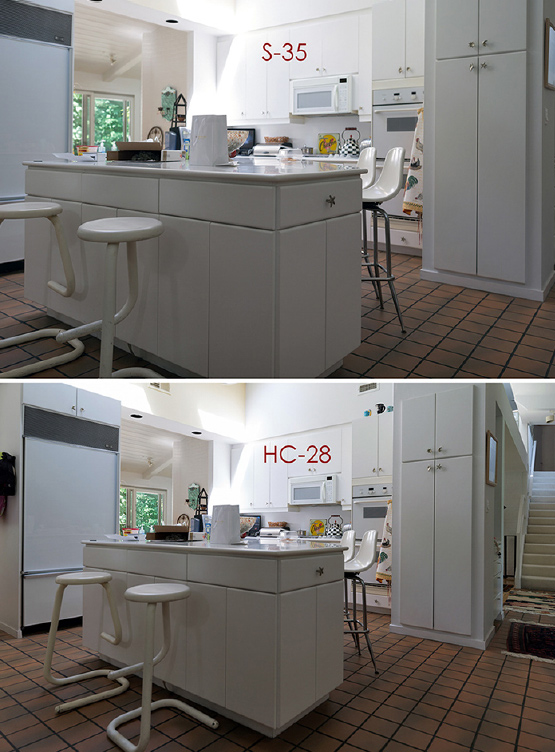 The other specific relates to focal lengths … the jump from S-35mm to S-70mm is a fairly substantial one … filled by either Hasselblad’s HCD 35-90 Zoom, or more specifically the HC 50/3.5-II. IMO, the 35-90 zoom is a beast of a lens, and while convenient, is quite a handful. It is very good optically, but IMO defeats the S camera’s big advantage compared to other medium format cameras: size and bulk. I prefer the much smaller HC 50-II to fill the gap with an approximate 35mm field of view as measured in 35mm terms. 35mm is a focal length I use a lot with other cameras, and I relish the idea of now using it on the S2. Be aware that the newer 50-II is the one to seek. It is a substantial improvement over the previous HC 50mm. Knowing Leica folk and their optical demands, I’d suggest going for the MK-II version. 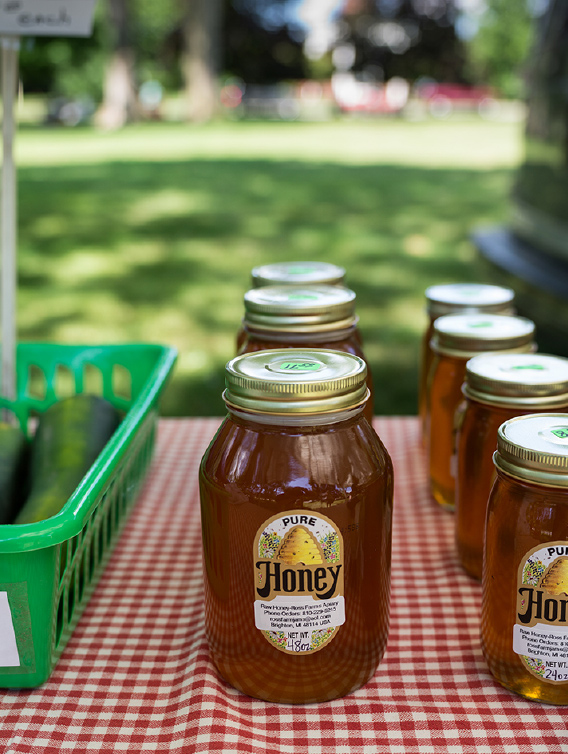 Then there is the HC 100/2.2 … not only a focal length unavailable in the S line, and fitting nicely between the S-70 and S-120mm … it also provides the fastest aperture you can shoot with an S2. This lens is renowned for its character … both it’s buttery Bokeh, and gentle roll off from in-focus to out-of-focus areas. It also happens to be wickedly sharp. Here’s a S2- 100/2.2 snap of my doggie: 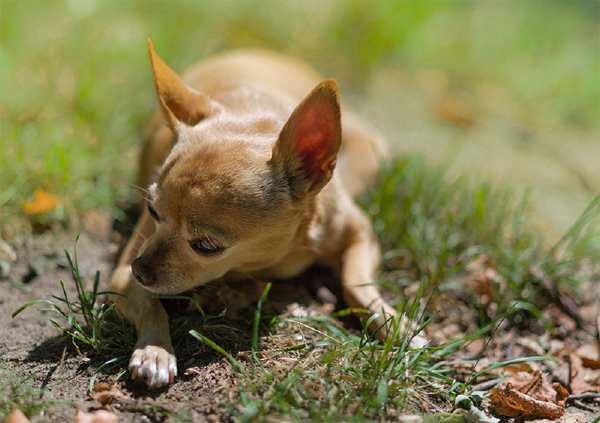 For longer lens users, there is the HC210 and 300mm optics. Sorry, I sold my HC 300mm so cannot provide samples of it shot on the S2. However the HC 210 is an unsung optic that reaches out a bit more than the S-180. It also has a very nice character and used a lot by professionals to do head shots and other portraits. For such a long focal length, the HC-210/4 focuses very fast on the S2.

Lens Profiles: distortion, vignette, and CA corrections are possible for each of the Hasselblad HCD and HC lenses. These profiles are available from Leica and can be loaded into the Adobe Light Room software. Some people have questioned why software has to be used … well, because there is no such thing as a perfect lens … and while some of the S optics get pretty close, even they benefit from software correction profiles … which are also available in Light Room under Leica Lens Corrections.

Auto Focus: So far the S2 auto focus of the HC and HCD lenses seems on par with normal use on a Hasselblad camera with two exceptions:  My H4D/60 has an on-board AF assist light for use in low ambient conditions which the S2 does not; and the Hasselblad camera performs their “True Focus” function that micro-adjusts for focus shift when stopping down … something I doubt Leica was able to incorporate. For the most part, the AF was fast and accurate … more or less fast depending on which lens and what the ambient conditions were.

Color rendition: So far, I’ve noted a slightly warmer rendition between the H lenses compared to the S optics using the same camera settings. Just an ever so slight yellow as opposed to red. This is actually a bit desirable for me because it affects skin tones in a positive manner, where the cooler Leica rendition sometimes produces an ever so slight magenta cast to skin. Using manual white balance virtually eliminated this difference.

Price: This adapter is quite expensive, which most Leica users are used to. How Hasselblad users will view it depends on the degree of functionality they can get from securing a S2 and this adapter and how many H lenses they may already have.  I would think that as a S2 and H4D user I’m the rare exception where the value is obvious and the price well worth it to expand both the use of the H lens system I already have, and expanding the versatility of the S2 camera I already use.

That Leica did their home work by providing profiles specific to the S sensor size, and made this a seamless, well made tool to expand the functionality of the S system is a remarkable achievement.