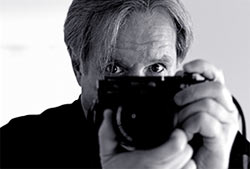 My name is Marc Williams, and I’ve been a photographer for over 40 years. For a good percentage of that time I’ve been friends with Sam Shoshan who has provided invaluable advice on camera gear to help me achieve my creative goals. So when he asked that I write a blog for him, I jumped at the chance.

For those who don’t know me, my background is as an Advertising Executive Creative Director.

My initial “in to advertising” was art … and I started as an Art Director. This put me in contact with some of the best photographers and cinematographers in the world, and it was they who infected me with a life-long love affair with the “Art of Photography”.

So what is a “Mad Man” doing writing a photography blog? Hopefully I can provide a different creative perspective in an age where the tools we use are changing so fast that it is hard to truly learn how to use a camera before we are onto the next one.

I believe the relentless pace of digital development has created a cacophony of overwhelming technical chatter that has drowned out the very reason we should be making photographs in the first place … personal creative expression.

As an award winning Art Director that has collaborated on literally million of dollars of photography and cinematography, I’ve often been asked to review a portfolio … not once in that process did I ever ask what camera was used, what lenses, or how many mega pixels. The only criteria was the vision and ideas being expressed.

In my experience, I haven’t met many photographers whose camera didn’t out strip their ability to express themselves. Extremely good cameras are commonplace, dedication to making meaningful and moving images is not.

In fact, I will go as far as to say that some photographers with great creative potential are so distracted with the ever changing science of photography, they never reach that potential.

What is the value of paying a lot more attention to your personal creative growth? Well, science has leveled the playing field between expert and novice in terms of ability to take a decent image. This fact has impacted many fields of photography where at one time people often hired a photographer for their ability to take a technically decent image, where the novice could not. That was then, and this is now.

Now, if you do not have a consistent vision, a distinct signature style, a way of speaking with images that provide a unique and powerful insight, that socially surprises the eye, or provides a way of seeing the world that opens minds and touches hearts, then you disappear into the mass democratization of photography and swell the ranks of anonymous photographers … a mere cog in the mechanics of technology.

What is particularly disconcerting, even depressing, is how this democratization has fostered a fraternity of mediocrity that all to often is no longer even capable of recognizing a stand-out talent. Instead, the masses laud that which is similar to them, and often ignore the presence of the unique amongst us. Nothing new there, except it is now an epidemic because of the internet. Where “birds of a feather” once flocked together in discrete self-congratulatory groups, they now flock by the millions world-wide.

The net effect is to stunt true individual creative growth on a global scale. Why is this?

Any artists strives for personal recognition of their vision. As Picasso once said “ A painting kept in the closet, might as well be kept in the head”. There-in lies the rub today. While some have managed to rise above the fray, many are mired in it like a tar pit. If “Mom” doesn’t put your drawing on the fridge door, you strive to make something she will. Trouble is Mom doesn’t know her ass from her elbow when it comes to creativity, and nether do most internet critics with a camera.

I do acknowledge that many enthusiasts make photos just for the joy of it, and the love of finely engineered tools … which accounts for the plethora of puppy photos, and redundant post-card records of trips taken, or the fact that someone uses the most advanced $7K sports camera to shoot the Grandkids running around at the park or beach.

However, that doesn’t preclude an even greater joy and sense of accomplishment IF one delved deeper into their creative reserves. More importantly, it just may open more eyes to recognize those who have delved deeper into their latent creative potential, and have begun to produce images beyond the mundane. Nothing wrong with doggy photos … one need only look at the work of Eliott Erwitt to recognize that fact.

So you have a good camera, and you are pretty good at making an image: now what?

Most people avoid that question like the plague. They have no purpose other than they “love to take photographs”, and those around them stoke their ego with compliments. Part of the reason is because many folks do not have an art background where self-criticism is taught from an early stage in their development … and those providing developmental feed-back are experts. Basically, most enthusiasts, and far too many professionals, are alone despite communicating with thousands of other photographers on the web who also share the love of making photographs.

It is not a coincidence that many of the great photographers owed their successful creative explorations and inspiration partly to associations with equally great art directors … such as Harper’s Bazaar Art Director Alexey Brodovitch who introduced and influenced many of the best photographers of the time: including Irving Penn. Cartier Bresson and Richard Avadon … yet how many know the name Alexey Brodovitch outside the art world?

The company you keep forms you. There is a book titled “Geniuses Together” that maps out how most all creative growth in art has come from “schools of” … where those dedicated to pushing their personal creative envelope “flocked to together” and cross pollinated one another.

If you flock together with a pack of Pigeons don’t expect to emerge from the experience as an Eagle. Seek those better than you as photo friends. Don’t attend classes to make better technical images … choose to learn from those who’s work moves you, speaks to you intellectually and emotionally. When you are inspired to make something meaningful, the technical aspects will come naturally because you are driven to make it work for the sake of your art.

I have a friend that teaches with a focus on unlocking creativity from his students … often many of his students have much better equipment than he does which is meaningless to the purpose at hand.

When I review someone’s work, the purpose isn’t to destroy their confidence, but to look for the hidden potential and get it out into the open. Just today, a photographer who once came to me for a review quipped how “crushed” he was when I first flipped through his book so fast it stunned him … yet how I zeroed in on his great strength for a certain way of making a unique image amongst a book full of “ordinary” images.

Now he has pursued that uniqueness to great personal success and personal satisfaction.